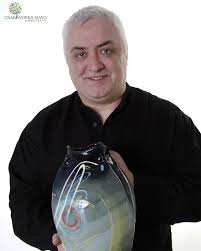 Roger always had an interest in working with shape and design and works to combine the two techniques, so that what result is not merely an piece of pottery, but a form of sculpture that can be admired for it’s balance and movement in decoration. It can move from having a two dimensional surface to having three-dimensional depth, caused by the use of on- glaze or slip decoration. Through research he has gained a knowledge of pottery techniques and cultures which have both inspired and educated his understanding and ability to acknowledge the human interaction with clay.

He throws all pots on the potters’ wheel always looking for ways to develop techniques of altering the object to give it an extra feature in both its design and aesthetic and latterly has begun to experiment extensively with slip decoration. He works with 15 different slips and more recently has started to apply the slips with his own thicker brushes, palette knives, slip trailers and even his fingers. Roger admits to constantly learn from previous processes; using intuition to help interpret the final design. His pots have developed over time and reflect many influences. These range from his local Clew Bay, Westport and Connemara with its sculptured landscapes which can mystify, amaze, shock and enlighten the mind. He also is very influenced by the work of potters from all over the world, both past and present and firmly believes that culture and environment play a role in the development of their work

As a nation of storytellers Roger thinks his pots reflect what he sees of the surrounding people and environment which can stimulate and invoke the different characteristic feelings of love, hope, sadness, happiness, joy, fulfilment and acknowledgement of ones presences in this ever-changing world that we live in.

Art available from this Artist